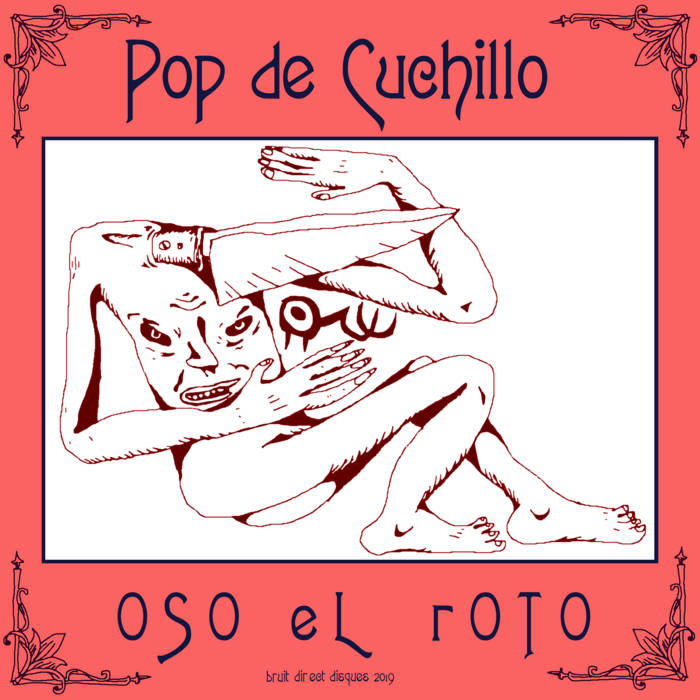 While he’s known alternately as David ( la familia ) & Mr. Loayza ( la abogados ) to the gravity-clutchers of the world, for us Falstaffian iota’s what inhabit the non-boundaried scrub out here in wirebrush country, he is always & forever Oso El Roto. My first encounter with the man’s multi-faceted snert was on the lp, ‘Mojon Po’l Agua’ back in 2007. Housed inside a brutish sheath of fabricated, handpainted, cardboard was an album brimming with aberrant, gibbering, genius. Since then a dozen or so releases have spunked into the discography, the latest being this one on the estimable Bruit Direct Disques label.
On ‘Pop De Cuchillo’ our hero has returned to his native Chile (after years in Paris) & not surprisingly, hasn’t lost a step in the transition. If anything, Oso El Roto may have “mellowed”, which is to say he’s moving at 1,000,000,000 mph instead of 1,000,000,001. It’s hard not to draw comparisons to that other great & prolific Chilean of the absurd, Alvaro, but Oso El Roto has never broken from his native tongue, so the elitists-for once-are not Anglais. While Oso El Roto trucks most assuredly in the lurch of lo-fi, the way he grinds those gears is spectacularly kaleidoscopic. The aural offerings brought forth on ‘Pop De Cuchillo’ are a smorgasbord of charred delicacies to feed your head. Some artists go their whole lives trying to catch lightning in a bottle ONCE. Then there’s Oso El Roto, who seems to absorb it at will. Impervious is not born, it’s earned. For fans of The Rebel, Jerry Solomon, Pierre Schaeffer, Sun Ra, Eye Yamatsuka, Made For Chickens By Robots, Waste Sausage, Leather Donut, Chocolate Monk, Bananafish magazine, NWW list, Llama kababs, Borgona, Yage, Gary Panter, Yoko Ono & Ono.
– Tom Lax, Catbird, Ohio

This record is a collaborative experience with musicians of the independent Chilean scene. During several sessions of live streaming recordings, more than twenty participants sent me audio files or left voice messages by chat (tracks for melodies, noises, songs or insults). Others wrote lyrics for me. And with all this material I made my songs, live. These are more than a dozen songs full of experimental collages, raps as well as a few nods to Latin American folklore and pop.
This album tells of the bitterness produced by the comic absurdity to want to be a rock singer in poverty and capitalist horror of the Chilean reality.
– Oso El Roto